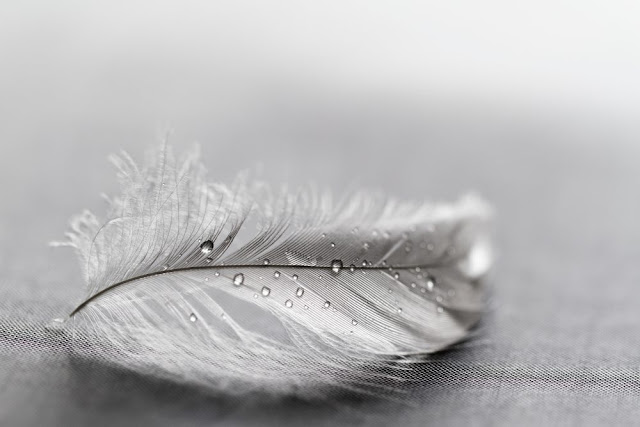 "Meji, look your silver hair has arrived!" I crane my neck through my classroom window to see the familiar Silver Hair protruding above my school's compound wall. My eyes warms-up and lips widen in delight. Time to go home. Papa has arrived.

Those were my school-days. Papa used to pick me on his grey Bajaj scooter. I called it my school boat. If you grew up in 90's you would know my fascination for papa's scooter. 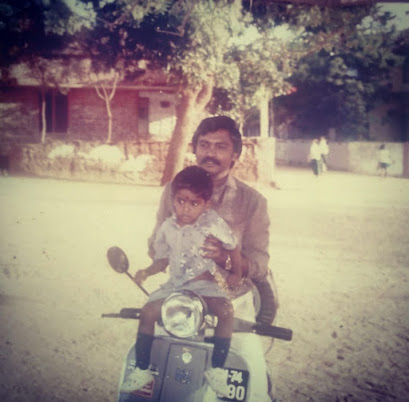 Every day after school, I would wait for him either in my classroom or under the mango tree. His hair level, a good score above my school's compound wall, would hint me his arrival.

I had always caught him perform a meticulous rhythm while he waited; removing his helmet, balancing it on the scooter head, pulling a comb from the pocket, brushing his hair thrice, setting them in place with his hands, and waiting without getting off his bike. Have you watched the tennis famous Rafael Nadal's rhythmic pre-serve routines? Nadal touches 9 parts of his body starting by dusting dirt from either shoe, then touching his bottom, his left shoulder, right shoulder, nose, left ear, nose again, and right ear. It's quite an interesting routine he follows (watch from 1:45 for his pre-serve routines).

My Papa did a similar routine with his hair every time he stopped his scooter and removed his helmet.

Sailing back home in my papa's school boat had been the most joyous of all times. I anticipated those evenings fondly, 'coz I know I could stuff two or three butter buns without my competitors (siblings) in tow. We made a stop every other evening at a crowded fish market where papa went searching for the best of fish while I snacked on my favorite buttered buns sitting on my school-boat dreaming. You may now know why I'm plump in size :D

Strangely I was the only one who papa sailed to and from school.

My younger bro and sis bore wings by then and rode their own cycles to school. I was my papa's first Project and a Project I stayed. I recall, there was only a year in between when I adventured peddling a cycle to school. That stopped when I dramatically fell in the middle of a road while returning from school one day. I returned to the safety of my papa's school boat again. Right from a kid to a kumari, except for some time in an autorickshaw, I'd always been the baggage my dad carried without complaint - first on his bicycle, then on his scooter, and later on his bike. 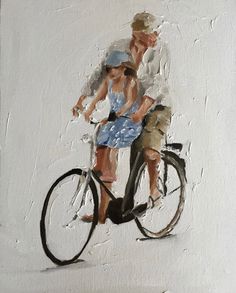 I was in my 10th grade when he bought his new bike. It was the same time around his hair had turned grey. Not due to age, but because my health-conscious mum had made him a special mix to treat his Izha Narai (premature white hair) which reacted contrarily and turned most strands of his hair silver. (By the by, I don't have any of his grey-haired pictures to show you now. Know why? By the time my papa was in his late 40's, he realized he had to stay young for his youngest daughter (my lil sister) and dyed his hair black. And not just stopping there, he pulled out photos from albums and sketched all his grey hair black 😂 )

Papa never regretted it. In fact, he never did regret anything. Losing his parents still young and growing up with his siblings and most days half-starving, he said, he never regretted. His' was a dignified family in our locality that suffered fall through finance in his much younger days. He used to say he only had 2 vaeshtis to wear to college and had to borrow a pair of pants from his friend for his graduation ceremony. While sharing his substandard past his eyes would hint he did not entirely regret anything. But there would always be that determined glimmer in his soft eyes to help anyone to have a different fate. And that conviction turned him a social butterfly, always fluttering to society's call, serving and helping anyone in need with his mind and money. And that exactly was what he was doing when he received his final call. He was a self-made man and a winner in his quest. He provided us with more than what we could have asked for in matters of education, money, morals, and spirituality. 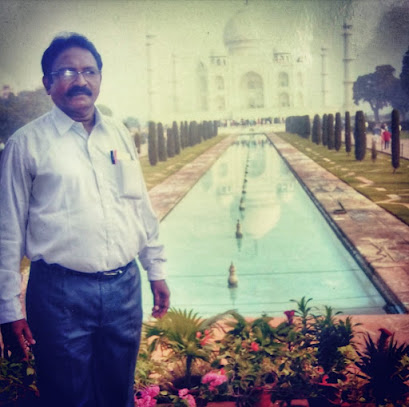 Once when I took a stroll with papa through the gardens of my college, I asked him how he was able to serve without expectations and forgive without an apology, he said, "Life is simpler that way." He elaborated "helping and serving is our choice, not theirs, so there is no point in expecting it back." It is simply said than done. But papa lived it that way until his last breath. 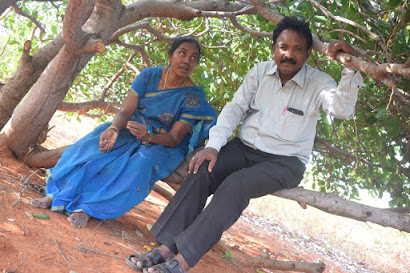 Recently, uncle Vivehanandhan called me to share his condolences. He reminisced his time working with papa in Ooty. He recalled how papa always kept his surroundings cheerful with his special art of making fun without hurting someone's feelings, and his compassion towards fellow beings. He also shared a condolence message through WhatsApp. It was quite apparent how much he missed papa like we did. 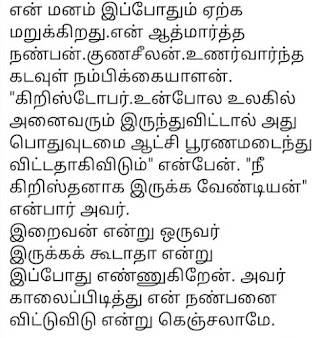 Papa was posted in Ooty at the beginning of his career.

He was then a young cooperative audit officer and lived with his friends in Ooty. Uncle Vivehanandhan was one of them and the one who's constantly been in touch with papa after that. Papa served in Ooty for 7 years when he married mum and took her there with him. But within a year after marriage, they had returned to their hometown to settle down. Several years later when I and my siblings were all still kids papa took us all again to the place he lived in Ooty. It was wonderful. The fresh mountain air, the misty atmosphere, the school that seemed to grow above the house, the picturesque green terrain - all left me mystified. I wondered why papa left this divine place to settle down in a village. Mum didn't have an answer.

It was much later while I was rummaging through my papa's belongings that I found a letter that explained matters.

Popular posts from this blog

January 07, 2019
Invention from a Spiky Seed It was 6 in the morning when I got up from bed today. It was so cool and wonderful to see nature at its best. I walked out of home at 6.15 for a morning jog, in the park beside my home. Few other people where already there inhaling the morning freshness. As I jogged, I passed by a mom and a kid. The little girl was tugging at something in her jenkins. I observed that a spiked seed had got stuck in her cloth and she was trying to remove it off. She won after a little struggle and the spiky seed came off balling pieces of thread from her dress.  I jogged on capturing the scene.  The brief episode sparked my memory on something I had read in a website a few days back, under the title Nature Inspired Inventions. The author had discussed how great inventors have taken inspiration from nature to create some awesome everyday products.  The article said, a Swiss electrical engineer,  George de Mestral, had invented Velcro , after experiencing a
Post a Comment
Read more

The Story of a Not-Mom

March 21, 2019
“Hold the baby, it’s a boy!” said the lady and handed me a peeing baby. It was a Sunday. The service just ended and I was walking out the door. A good old neighbor lady walked past me with her daughter-in-law and her two-month-old grandson. I greeted her with good wishes, just like everyone does on a Sunday morning after Church. She should have pitied me, I guess. Her action proved that. On my greetings, she grabbed her  pee ing grandson from her daughter-in-law and handed him to me right in time for the infant to wet my dress. The scene was both fun and embarrassing. Have you ever heard people say “it’s good luck if a newborn pees on you”? It’s a tradition here and in many other cultures too. Probably it came about as a way to console you when you get  pee d on. But somehow it grew hands and legs on its own and now someone has put a  bindi  to it. Yeah! Now it means “if you don’t have a baby and got to hold a  pee ing one, you’ll be blessed with a baby soon”.
25 comments
Read more

Mejella
I’m Mejella, the magnificent. Born in Kanyakumari district, where engineering is everything, I’m engineered…well…that’s not the right word, but yeah I’m planned…wait, what I mean here is, with Kanyakumari growing engineering colleges at every hill bottoms, I was forced into engineering, like every other peer in my town. Things happen for the best they say, and that’s right. I learned to appreciate the beauty in reality. Born there was my identity as a writer and an orator. Engineers could become anyone in this world you know, not just engineers :p Today I’m a writer writing for websites, research papers, books, blogs and when I’m overly enthusiastic I teach part-time. My personal blog is my leisure. It speaks of my little experiences in my life tasted personally or emotionally. Tell you what, reality may not always look beautiful like our glorious imagination. But when the waters clear, you can see the beauty in the natural flow of events. Sunshine is beautiful only after a little rain. I’m seeking beauty in the reality of my life. Come join me in seeking the beauty of reality.