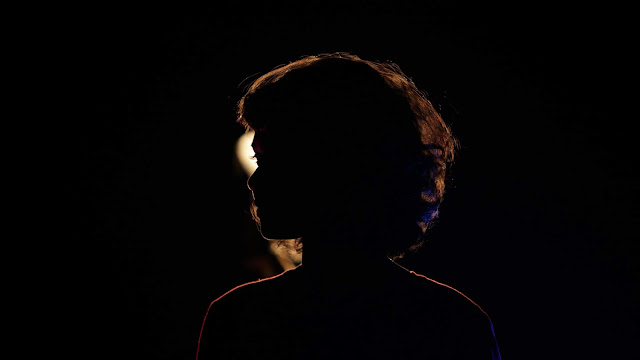 “Don’t post those pictures on Facebook”, were my mom’s welcoming words as I hugged her capturing the joyous moment on my smartphone. I was at my parent's for a weeklong stay and those were the first of many chants that followed. The same warning went to my sister as well who was in her college and quite active on social media. Thankfully I didn't get to hear what she had to hear, “Remove your dance video from YouTube, change your Whatsapp status, tie up your hair, no loose hair, don’t wear makeup…etc.”

Looking plain and removing profile pictures are a mother’s way of protecting her girl from the immoral psychopaths. The repercussions of the #Pollachi abuse is massive and today I’m particularly addressing the lighter note of the issue (but what's alleged to be the base) - women’s presence in the social media.

#PollachiSexualAbuse has caused a whirlwind in Tamil Nadu. So much for the land that’s known for respecting the chastity of women. What a shame!! And to know that the politicians who swore to be faithful and protective of their land were the active players here! Sigh! Curse on them.

My friends in other cities like Coimbatore and Trichy spoke the same. They too were warned by their parents to keep away from social media and posting pictures online.

I give my love and hugs to all those mothers out there, ‘coz I realize, their concern is born out of love, and stopping us from posting a DP is their way of offering us protection. But is that okay?

Quit Social Media to be safe?

Quite contrary to the momma’s thoughts, I feel restricting a girl from social media is not the best way to save a girl. It is the awareness and education about the misuse of social media that would help youngsters be safe. Not by running away from it.

Social interaction has become a necessary activity to access news & information and to socialize worldwide.

It is just not right to ask a young woman to cover her face and shut herself from the world beyond. Have we not fought ourselves free from that era? We have redeemed ourselves from a state of inequality to achieve what? this? No. Not at all.

One should also not overlook the fact that women are being abused even without social media’s influence.

When brothers and boyfriends, dads, uncles, and grandpas have the right to update their moments on social media, why not a girl?

Don't simply give that "why does she have to showcase herself when she’s the one facing trouble?" Maybe she posts for her profile to have a face, maybe to share her joy, maybe to find business opportunities, or maybe to make the ton listen to what she’s got to say. The mind needs to connect with a face to communicate, that’s why we have pictures of GOD when we pray! Don't we? Social media is her resume’ now.

Gone are the days where people look for a single sheet of paper to know about you. Generally speaking, your activity in social media is what’s getting you a job today (or you can say better prospects). So, it is not the right thing to force her to quit the digital space.

When I sit debating with myself on this topic I receive this post on my WhatsApp. 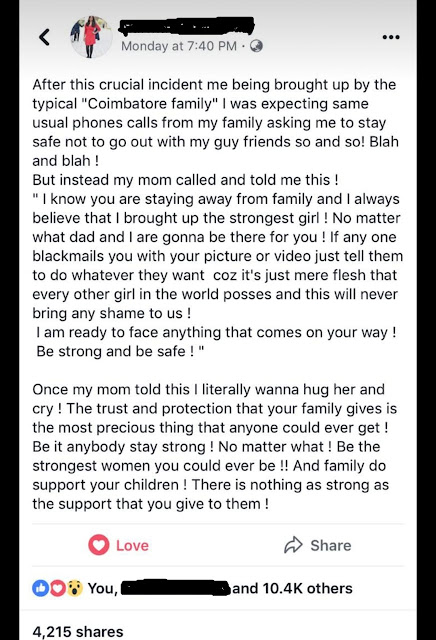 Had the first victim took the problem boldly to her parents, the alleged 60 cases at Pollachi wouldn’t have happened at all. But she didn't. Coz she couldn't. That choice was not open to her. She is instilled with the fear of saving her chastity and her family’s dignity. What would she do? At least there was this 19 year old who broke the case to her family, else #Pollachiabuse would still have remained in darkness.

It's high time we fed young girls with the courage to face situations that she’s not expected to face. Everyone has a conscience that guides the self on what to do and what not to do and what actions may invite trouble. Youngsters should be taught to listen to their conscience. Parents must have the doors unbarred for open talk and give her the confidence that they are there to back her up, rather than talking in riddles and simply warning them to be safe and running away from the internet.

What will happen if she’s only fed with fear and warnings?

If people stick to the above fears, soon, very soon there might be a drastic decrease in the share of young women. Already research in 2017 had stated that the share of young women to men in India will come down to 31.8% by 2031. Why so? It started way back with our dowry system and sati, and later with the question “can a woman provide and protect”; and now it continues with a fearful question of safety, “what if she’s abused”.

Do you know what this gender imbalance will cause?

I bow my head to the parents of that Coimbatore girl, who advised their daughter to boldly face a reprobate if she’s blackmailed, and promised to embrace her no matter what.

Shying away should no more be an option; doing so would only make our gender unfit to survive. Being born a girl is not a curse. We are God's co-Creators! The source of all virtues. We only need to armor ourselves with the courage to face threats boldly and break through traditional barriers.

When I see a cockroach spoiling my food I take it down by a thodappa kattai (thennai velzhakamaar is best), I don’t burn the entire house down or the people in it. Observing this news from home in the southern tip of the state I see some filthy cockroaches roaming around. It is time to find the best thodappa kattai to thrash them off, not to burn down the spirit of the entire female ton!

Popular posts from this blog

January 07, 2019
Invention from a Spiky Seed It was 6 in the morning when I got up from bed today. It was so cool and wonderful to see nature at its best. I walked out of home at 6.15 for a morning jog, in the park beside my home. Few other people where already there inhaling the morning freshness. As I jogged, I passed by a mom and a kid. The little girl was tugging at something in her jenkins. I observed that a spiked seed had got stuck in her cloth and she was trying to remove it off. She won after a little struggle and the spiky seed came off balling pieces of thread from her dress.  I jogged on capturing the scene.  The brief episode sparked my memory on something I had read in a website a few days back, under the title Nature Inspired Inventions. The author had discussed how great inventors have taken inspiration from nature to create some awesome everyday products.  The article said, a Swiss electrical engineer,  George de Mestral, had invented Velcro , after experiencing a
Post a Comment
Read more

The Story of a Not-Mom

March 21, 2019
“Hold the baby, it’s a boy!” said the lady and handed me a peeing baby. It was a Sunday. The service just ended and I was walking out the door. A good old neighbor lady walked past me with her daughter-in-law and her two-month-old grandson. I greeted her with good wishes, just like everyone does on a Sunday morning after Church. She should have pitied me, I guess. Her action proved that. On my greetings, she grabbed her  pee ing grandson from her daughter-in-law and handed him to me right in time for the infant to wet my dress. The scene was both fun and embarrassing. Have you ever heard people say “it’s good luck if a newborn pees on you”? It’s a tradition here and in many other cultures too. Probably it came about as a way to console you when you get  pee d on. But somehow it grew hands and legs on its own and now someone has put a  bindi  to it. Yeah! Now it means “if you don’t have a baby and got to hold a  pee ing one, you’ll be blessed with a baby soon”.
25 comments
Read more

August 06, 2020
"Meji, look your silver hair has arrived!" I crane my neck through my classroom window to see the familiar Silver Hair protruding above my school's compound wall. My eyes warms-up and lips widen in delight. Time to go home. Papa has arrived. Those were my school-days. Papa used to pick me on his grey Bajaj scooter. I called it my school boat. If you grew up in 90's you would know my fascination for papa's scooter. Every day after school, I would wait for him either in my classroom or under the mango tree. His hair level, a good score above my school's compound wall, would hint me his arrival.  I had always caught him perform a meticulous rhythm while he waited; removing his helmet, balancing it on the scooter head, p ulling a comb from the pocket, brushing his hair thrice, setting them in place with his hands, and waiting without getting off his bike.  Have you watched the tennis famous Rafael Nadal's rhythmic pre-serve routines? Nadal touches 9 parts of h
12 comments
Read more

Mejella
I’m Mejella, the magnificent. Born in Kanyakumari district, where engineering is everything, I’m engineered…well…that’s not the right word, but yeah I’m planned…wait, what I mean here is, with Kanyakumari growing engineering colleges at every hill bottoms, I was forced into engineering, like every other peer in my town. Things happen for the best they say, and that’s right. I learned to appreciate the beauty in reality. Born there was my identity as a writer and an orator. Engineers could become anyone in this world you know, not just engineers :p Today I’m a writer writing for websites, research papers, books, blogs and when I’m overly enthusiastic I teach part-time. My personal blog is my leisure. It speaks of my little experiences in my life tasted personally or emotionally. Tell you what, reality may not always look beautiful like our glorious imagination. But when the waters clear, you can see the beauty in the natural flow of events. Sunshine is beautiful only after a little rain. I’m seeking beauty in the reality of my life. Come join me in seeking the beauty of reality.